Chennai is one of the fast growing Metropolitan cities in our country. The area of the Corporation was expanded from 176 sq.km to 426 sq.km in the year 2011. The Population of the Chennai city is fast approaching 1 crore. The Greater Chennai Corporation has taken various steps to provide necessary infrastructure facilities in the newly added areas of the City.

Section 176 of the Chennai City Municipal Corporation Act, 1919 entails the Greater Chennai Corporation to provide and maintain a sufficient system of public drains throughout the city.

The flat terrain of Chennai City needs effective Storm Water Drainage System to prevent water stagnation in roads, and average level of the land in the city is only 2.0m above the Mean Sea Level (MSL). Because of this flat terrain andtidal effects,flooding and water stagnation happens in the city during the monsoons.In order to mitigate flood from low lyingand flood prone areas of Chennai city, it is necessary to provide Storm water drain net work.

Storm Water Drain is normally provided in roads of 7m width and above. The minimum size of the drain will be 600X750 mm. The size will be designed depending upon the catchments area, land pattern and discharge. Storm Water drains are designed to relieve water stagnation in the water logging areas irrespective of the width of the road. The height of the drain top will be 6 inch above the road level. The top level of the slab and man hole doors should be flush with the footpath slab level. In all roads crossing the slab should be flush with road level. The drain should be in straight alignment. SFRC (Steel Fibre Reinforced Concrete) / FRP (Fibre Reinforcement Polymer) Man hole door with chute pipes is provided at every 5 m intervals. In addition to that Inlet chambers with Rain Water Harvesting is also provided at every 30m intervals to collect the rain water and to increase the ground water level. Pre-cast RCC drains are proposed according to the site condition with inlets at 10m interval. PVC pipes isprovided to accommodate the electrical and other utilities in Storm Water Drain crossings.

The Canals are constructed with retaining wall which retains the earthen banks,caving of earth during floodand gives an aesthetic appearance to the canal. The flooring facilities is such that men and machineries to carry out desilting works easily.

In order to alleviate flooding, a comprehensive proposal was prepared by the Greater Chennai Corporation in association with the Public Works Department (PWD). This proposal was approved by the State Level Sanctioning Committee, and subsequently appraised and sanctioned by the Central Sanctioning and Monitoring Committee, Ministry of Urban Development, Government of India.

To prepare the master plan for core city M/s. Aarvee Associates was engaged by Corporation of Chennai on 19.06.2008 itself. Then, by 2009, Comprehensive Master Plan for storm water drain was prepared by consultant namely M/s Aarvee Associates for the old Chennai City which is vetted by the Central Public Health and Environmental Engineering Organization (CPHEEO).

On the basis of topographical survey and its detailed analysis the Chennai city was divided into 4 watershed basins, Viz., North Basin, Central Basin, South Basin and East Basin and also comprising of 12 major catchments and the works were taken up under JnNURM funding.

At present SWD to a length of 345 km has been constructed in JnNURM funding at a cost of Rs. 640 crores in the core city

In first phase, detailed project estimates were prepared for Rs.1101.43 crore. In Cooumand Adyar basins have been proposed to be implemented with World Bank funding through Tamil Nadu Urban Sustainable Project (TNSUDP).Tender had been settled for 35 packages and SWD construction to a length of 326 km has been taken up, at present SWD works to a length of 220 km have been completed . The above works are carried out in zonal areas of Ambattur, Valasaravakkam and Alandur.

For the remaining 4 packages in canals namely Nolambur, Nandambakkam,AmbatturSidcoand Padikuppam, tender will be floated as soon as NOC is obtained from World Bank.

The second and third phase construction of Storm Water Drain at Kovalam and Kosasthalaiyar basin is also in the process of fund tie up.

As far as the ISWD project for Kovalam Basin (M1,M2,M3)is concerned, the German Development Bank (KfW) has been identified as the funding agency for implementation of the project at a cost of Rs.1243.45 crore to a length of 360 km. KfW has appointed M/s Kocks Consultants for revising the DPR for the M3 component of Kovalam Basin and is in the process of finalisation of revised DPR. M1 and M2 – the tendering process for finding a suitable consultant for reviewing a DPR has been initiated by KfW

As far as the ISWD project for Kosasthalaiyar Basin is concerned, the Japan International Co-operation Agency (JICA) has been identified as the funding agency to implement this project at a project cost of Rs.1881.66 crore to a length of 429 km. Tamil Nadu Urban Infrastructure Financial Services Limited has appointed consultant for preparation of revised DPR and consultant has submitted the inception report and is in the process of finalisation of revised DPR .

De-silting operations of Storm Water Drains are done by the respective zones. The de-silting of Storm Water Drain is done in a cyclic manner and is carried out twice in a year. This activity is being carried out in a weekly programmed manner throughout the year either with the use of departmental de-silting gang or through contract workers. The removed silt is cleared immediately and transported to the designated place through departmental vehicles. The in-let chambers and entry(chute) pipes are cleaned periodically.

Some of the Storm Water Drains passing through the densely populated areas, commercial areas and areas devoid of sewers always carry sewage. De-silting of such kind of drains is very difficult. To overcome this kind of problems, presently COC deploys super sucker machines for de-silting the storm water drain carrying sewer.

For removing hyacinth and desilting work Amphibian Machine has been purchased from Finland and the same is used in Buckingham Canal, Captain Cotton Canal and Adyarriver.

Modern Robotic Excavators were purchased from Switzerland for carrying out desilting operations from the canals having lesser width. This will work in the canals having water flow where silt and water level is even up to 8 feet.

Captain Cotton Canal – before and after removal of Hyacinth Amphibian Vehicle 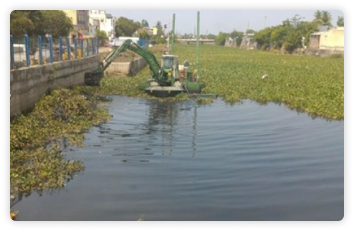 Hon’ble Chief Minister announced the “Sustainable Water Security Mission” in Chennai City for an estimated cost of Rs.5.00 Crore. The Administrative Sanction for the work was accorded vide G.O.(Ms) No.179, dated 08.12.2015 under funding from Chennai Mega City Development Mission(CMCDM) Under this mission various types of works such as construction of Campus Rain Water Harvesting (RWH), grey water re-Cycling, Storm Water Harvesting, restoration of temple tanks, lakes and ponds are taken up.

In the year 2015-16,Campus Rain water harvesting Work has been proposed at 6 locations and the works has been completed at a cost of Rs.19.40 lakhs. Collection of rain water from Storm Water Drain into two temple tanks and two parks have been completed.

In the ISWD Projects, RWH Structures such as Sunken Wells are being provided in the Parks, OSR Lands, play grounds etc.,

During the year 2016-17, restoration of 32 lakes / ponds and provision of RWH facilities in 17 nos. of temple tanks are to be taken up. In this regard consultant has been engaged for preparation of DPR and same is under progress. The letter of acceptance for preparation of DPR for the improvements to the Villivakkam tank was issued to the consultant M/s INMASS CONSULTANCY PVT LTD., by TNUIFSL. The Consultants has stated that, the DPR will be submitted as early as possible.